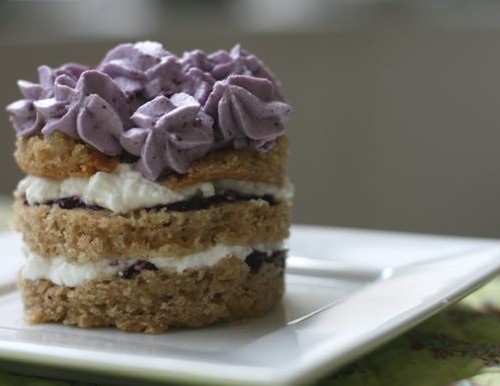 Sometimes I get this feeling on the weekends, where I just want to bake a cake. It's been a pretty regular occurrence since my Perfect Party Cake, now that I've gone beyond using cake mix from a box.

"But why, Katy, if you say you want to bake a cake, did you end up with these (admittedly adorable) mini cakes?"

Because I am still something of a cake novice, as I will readily admit. And because after my cake had been in the oven for about 30 minutes, and was clearly far short of fully cooked, I decided to 1) open the oven and 2) insert one of my dinner knives into the center to "test" it for doneness.

Which it how I ended up with a very sunken cake.

I thought, hmmm. I could cover up the sunkenness with frosting and no one would (probably) ever know. Or I could break out my sparkling new pastry ring, and make cutie-pie little mini-cakes out of the un-sunk portion of the cake. I chose the mini cakes.

The blueberry whipped cream frosting was just my way of saying, "yay, it's finally summer." I was going to decorate the top of the cake with fresh blueberries, but I though purple frosting too fun an idea to pass up. And I was right, no? 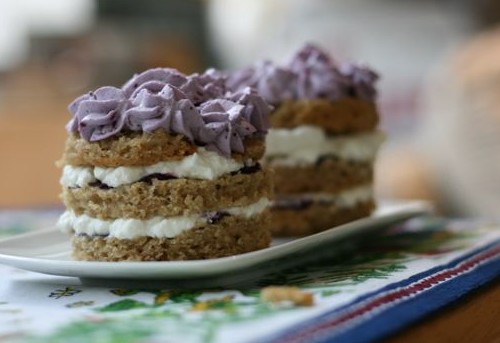 For the whipped cream and filling: 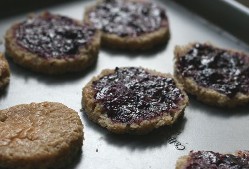 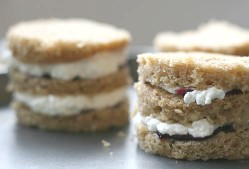 Preheat the oven to 325 degrees. Beat together the butter and sugar until combined. Beat in the eggs, milk, cinnamon and vanilla. Add the flour, baking powder and salt and beat until the batter is smooth and no lumps remain.

Pour the batter into an 8" springform pan coating with cooking spray, and bake for about 40-50 minutes, or until a toothpick inserted into the center comes out clean (if the cake looks like it's still wobbly, don't insert the toothpick!).

Allow the cake to cool completely before decorating.

For the whipped cream and filling:

In a medium saucepan, place the blueberries and water on high heat. Smush the blueberries with a spatula as they cook, and cook them until the water is mostly gone and they have a thick, jelly-like consistency. Divide the mixture in half and set aside to cool.

In a large bowl, whip the cream and sugar until stiff peaks form.

Once the cake has cooled, use a pastry ring to cut three 3" round mini-cakes out of the cake batter. Lift them out of the cake and place on a cutting board or other decorating surface.

For each mini-cake, cut the cake into three thin layers using a serrated knife or a cake slicing wire. Spread all the layers out on your cutting board. 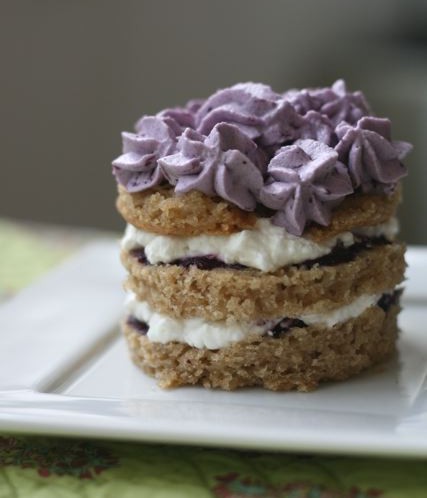