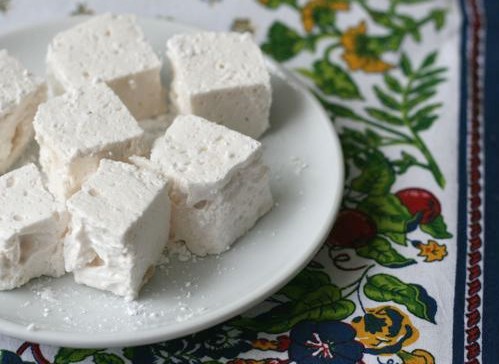 Here's the deal with these. Yes, this is a really good recipe for marshmallows. Yes, I've made it twice and I consider it pretty much foolproof (although the first time, I managed to melt a portion of my cheapo candy thermometer). But this isn't just a marshmallow recipe. These marshmallows, in addition to being delightful on their own, are part of *another* upcoming recipe. So, if you're not into eating plain marshmallows, check back on Monday morning for another marshmallow-tastic suggestion.

Before making these, I had only eaten homemade marshmallows to cap off an amazing lunch at Jean Georges. In fact, soon after that when I announced to a colleague that I was a great cook (modesty? me? they don't mix), he immediately shot back with, "well, can you make marshmallows?"

I have no good guess as to why that was his challenge, except for the hunch that perhaps he too had eaten at Jean Georges recently.

So marshmallows went onto my list. And, in a twist of fate, in Molly from Orangette's column in Bon Appetit a month or two ago, she focused on marshmallows.Â  I love her column, and it often convinces me to try recipes I would otherwise leave on my "to cook" list, so I went for it. I looked at a bunch of recipes, including this, this, and this, and eventually went for my own compilation.

And they were great, and not super difficult, once I got over my candy-thermometer fear.Â  The second time I made them, I let the sugar get a little too hot, but they still turned out ok.Â  That being said, the syrup heats up fast once you hit 180 degrees or so, so keep an eye on it!Â  But definitely give these a try -- especially if you have a camping trip coming up! 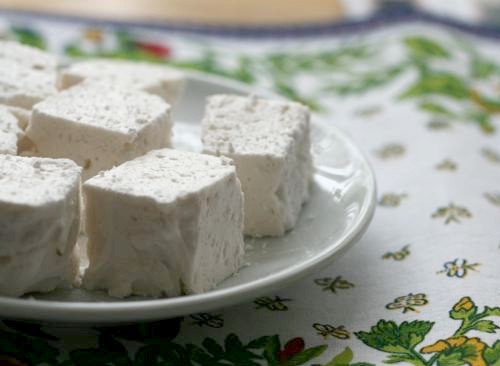 2 packets of unflavored gelatin (about 2 tbsp)

In a small saute pan, heat sugar, vanilla, corn syrup and 1/3 cup of water on high heat. Stir until sugar is dissolved, then stop stirring. Heat the mixture until it reaches 240 degrees using a candy thermometer, about 8 minutes.

While the mixture is heating, dissolve the gelatin into the remaining 1/3 cup of water. Also, in a large mixing bowl, whip the egg white to soft peaks.

Once the mixture has reached 240 degrees, pour it into the gelatin and water (you can do this in a medium-sized, heatproof bowl) and stir to combine. Allow to cool for about 3-4 minutes, and then pour the gelatin/sugar mixture in a slow stream into the whipped egg white, whipping constantly to incorporate. (This is pretty much impossible to do by hand, you need a hand mixer or a stand mixer, because the gelatin will start to set and get really stiff and difficult to whip).

Whip the mixture until stiff peaks form. Pour into a prepared tray lined with parchment paper or powdered sugar, and refrigerate for about 2 hours. Remove from the fridge and cut the marshmallows into squares (or other shapes). Roll them in powdered sugar, if desired, and serve! 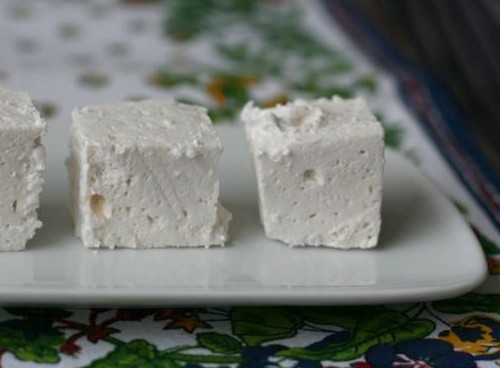