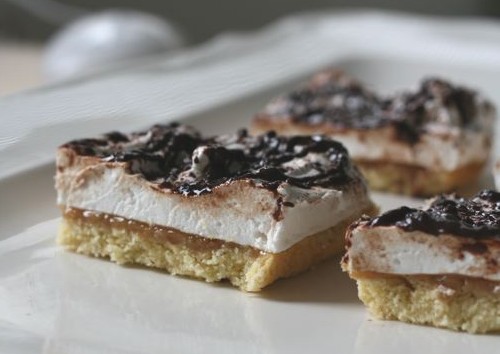 Today, meet something bigger. A.K.A. 'Marshmallow Caramel Bars.' Perhaps I should have called them 'Chocolate-Covered Marshmallow Caramel Shortbread Bars from scratch,' but that is quite a mouthful and, after making these, my mouth was already quite full.

And let's face it: there is something really yummy about multi-layer bars. They pretty much beg for the kid in you to lump all of your favorite things into one recipe, which, I readily admit, is exactly what I did.

But also, I think it's a little bit fascinating how many different treats you can get out of a few ingredients: flour, sugar, butter, water. Together, they make the crust. Take away the flour, and you get a basic caramel recipe. Add a little gelatin, and you get the marshmallow layer. The chocolate, of course, is a whole different story, but I was struck, while making these, with the fact that the same ingredients made up the backbone of each layer, in totally different ways. 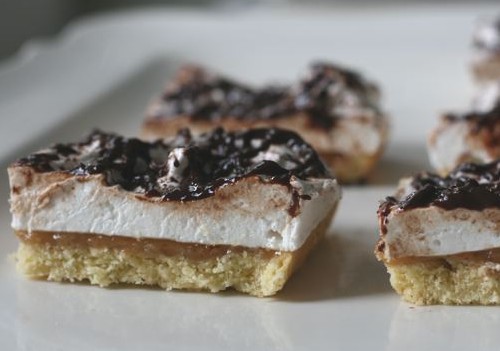 I will say that these bars took quite a bit of work, as baking from scratch often does. Can you really fault a recipe for the extra time and effort that it takes to, say, bake a cake from scratch as opposed to from a box? No. These take a comparable amount of time, and give you a comparable level of satisfaction (dare I say, smugness?) afterwards. (If you want to be a poophead and shorten the time this recipe takes, use melted store-bought caramels instead of the homemade caramel layer.)

Last, but certainly not least, the winners of The Man Who Ate the World by Jay Rayner are the following comments (randomly selected using this website):

I'll be emailing you all later for your addresses! And everyone else, you guys wrote about so many amazing meals, I wanted to try all of them (especially the 'perfect meal' of the author himself)! And if you didn't win, don't worry, there are other great giveaways coming up! 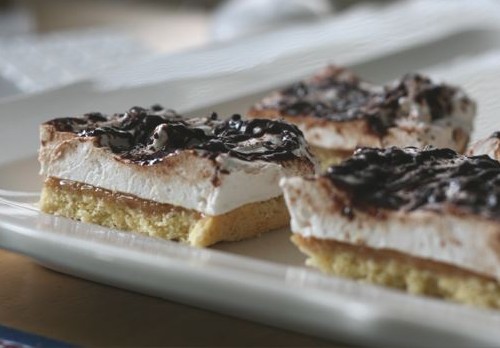 For the shortbread crust:

For the caramel layer:

For the marshmallow layer:

For the chocolate ganache:

Preheat oven to 350 degrees. In a medium bowl, mix together the butter, sugar, and flour until evenly crumbly. Add the egg and milk, mix to form a dough. Press into a buttered 9" by 9" or a 10" by 10" baking pan (see note, below). Bake for 20 minutes and set aside to cool in the pans.

For the caramel layer:

In a 2 quart saucepan, combine all the ingredients for the caramel layer. Bring to a boil, stir until the sugar dissolves, and then stop stirring. Continue to boil until a candy thermometer reads 230 degrees. Remove from heat and pour over the baked crust. Set aside the caramel layer to cool.

For the marshmallow layer:

Follow the directions in the homemade marshmallow recipe, except instead of pouring the marshmallow batter into a prepared container, pour it on top of the cooled caramel layer, and spread it out evenly. Allow to set in the refrigerator until marshmallows are much less sticky, about 2 hours.

For the chocolate layer:

Melt chocolate and cream together in the microwave for about 20 seconds, and then stir. If the chocolate is not fully melted, heat for another ten seconds, and stir again. Repeat until you have a smooth, chocolate ganache.

Pour the ganache over the marshmallow layer on the bars, and allow to set in the refrigerator for another hour or two (I know, it's torture).

Once the chocolate has set, cut the bars using a large, very sharp knife. The caramel hardens quite a bit but can still be cut, just apply pressure. Serve! 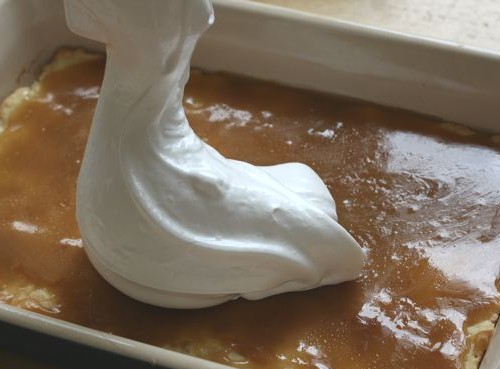