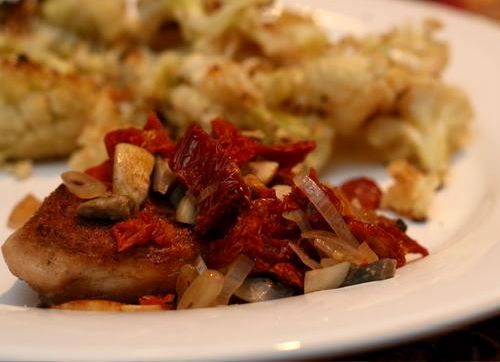 This site is not meant to be exclusively vegetarian, but if you were browsing through it quickly, you might think it was.Â  I was a longtime vegetarian, and now I'm a cheating pseudo-vegetarian who always asks for a bite of her fiance's cheeseburgers, but rarely would think to ever saute a chicken breast in her own kitchen.

That being said, when I do cook meat, I want it to taste good.Â  And this recipe satisfies that indispensible requirement really, really well.Â  I actually ate the mushroom and sundried tomato mix as a topping on a toasted roll, and that was great too, but Chad informs me that the full chicken version was better.

I will also admit that I set off our fire alarm not once, not twice, but three times while pan-searing these chicken breasts.Â  After the second time, I finally learned how toÂ turn on the exhaust fan above the stovetop (new kitchen -- we're still getting used to each other).Â  After the third time, I learned how to silence the smoke detector.Â  So if I burn our building down making dinner at some point in the future, at least it won't be to the tune of incessant, annoying beeping.

(Just kidding.Â  I think it resets itself after you silence it.Â  In any event, don't try that part at home.Â  Just make the recipe, and keep the windows open.) 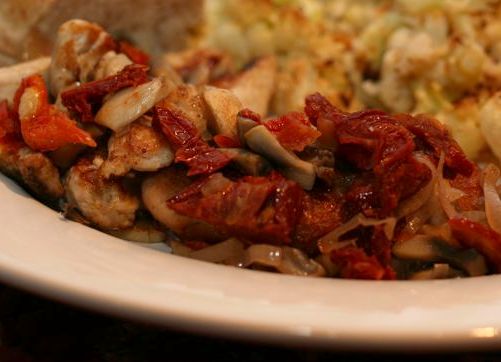 Heat 4 tbsp olive oil on medium-high heat in a nonstick saute pan until just short of smoking. Add chicken breasts to the pan and saute forÂ 5 minutes, then flip the breasts and saute for aboutÂ 4 additional minutes.

While the chicken is cooking, place the shallots and mushrooms into a smaller saute pan on medium heat, along with 2 tbsp water. When they have softened (about 3 minutes), add 1 tbsp olive oil, the sundried tomatoes, salt and pepper. Cook for an additional 2-3 minutes.

When the chicken is finished cooking, place it on a serving platter. Spoon the vegetable mixture over the chicken breasts, and serve.